I’m in charge of the decor; maintenance is not my forte. Fortunately, Saint is pretty good at fixing things. As I mentioned, our trailer is not vintage, by any means, and had been well-kept by the previous owner, we thought, but the bathroom floor squeaked annoyingly! We constantly worried that the floor was going to cave in at any inopportune moment. Saint had investigated what he could without removing fixtures and such, and found no glaring problem. One day, however, I went out to remove all the bedding to store for winter, and I felt a “spongy” place in the floor of the bedroom. When we had asked the previous owners if it had ever leaked, they hesitated and then explained that they had never experienced it, but their son had told them that a window in the bedroom had leaked. We didn’t notice any water damage and bought it, anyway, so when I reported back to Saint about the soft floor, he looked the situation over. He pulled off some trim, pulled back the vinyl flooring, and found the problem…right under the window. There was nothing wet and soggy, but the boards had been damaged and then dry rotted from that point. There were no termites, no wetness, and the damage was limited to a couple of outside boards which he removed and replaced, no problem. But, that left the vinyl to be repaired or replaced. It wasn’t that bad, but we decided we might as well rip it out and see about the rest of the floor…particularly by the squeaky bathroom.

We were pleasantly surprised that the flooring, otherwise, was in great shape. In fact, I considered whitewashing it instead of covering, but Saint thought it would not hold up under our traffic. The problem in the bathroom was so simple it was almost funny. The manufacturers had missed the stud on part of a row of nails; an easy fix with a nail gun! No more squeaky floors!!

We chose Allure Light Elm vinyl planks from Home Depot because we thought they would be easier to install in a confined space, plus, we didn’t want to remove the booth or beds, just floor up to them. In hindsight, we would not choose that. First of all, no one mentioned as we were ordering and inquiring that these are not recommended for sunrooms or camping trailers. Secondly, we paid $1.49 or $1.99 per sq. foot at Home Depot and later saw that Lumber Liquidators had them much cheaper. Lastly, we had to order more boxes than we thought we’d need and there were broken or ripped planks in every box. Whether that were the fault of Home Depot, Allure, or UPS, I don’t know, and we could have returned (an extra trip and an extra wait as they were not in stock) probably, but I got no response when I complained to Home Depot about the product. We worked around the damage, but the floor for this little trailer cost more than all the other updates combined. It wasn’t something we had planned, but it turned out okay…and did I mention, NO MORE SQUEAKY FLOORS? 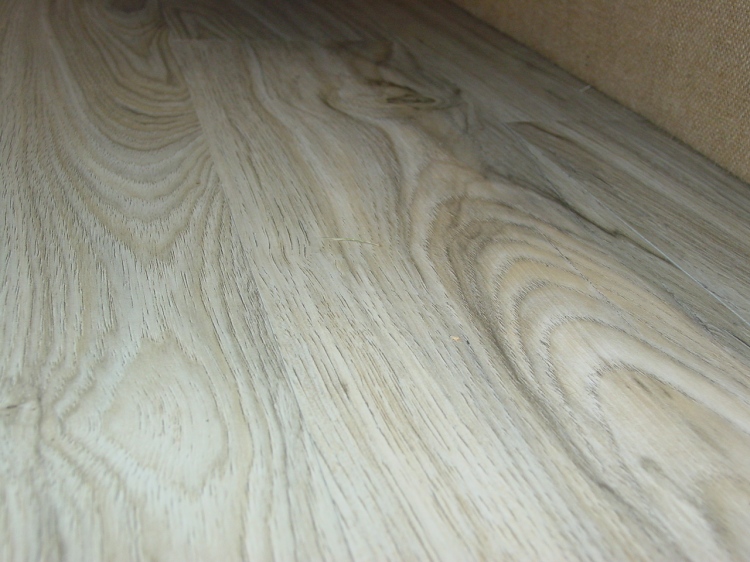 While we had things in a mess, I asked Saint to make a minor modification in the kitchen. The dining booth makes into a bed. Well, we know we will never need that, and I toyed with the idea of removing the booth completely and putting in a table and chairs, but that would eliminate the storage under the benches, and storage is a premium in camping trailers. To get to the storage area, however, you must remove the cushions of the benches; way too much trouble, so I had kept only things we rarely used under there. For Christmas, I got the mother load of cast iron and was in need of an accessible place for it. I asked Saint to cut out the end of a booth and put a door on for me. 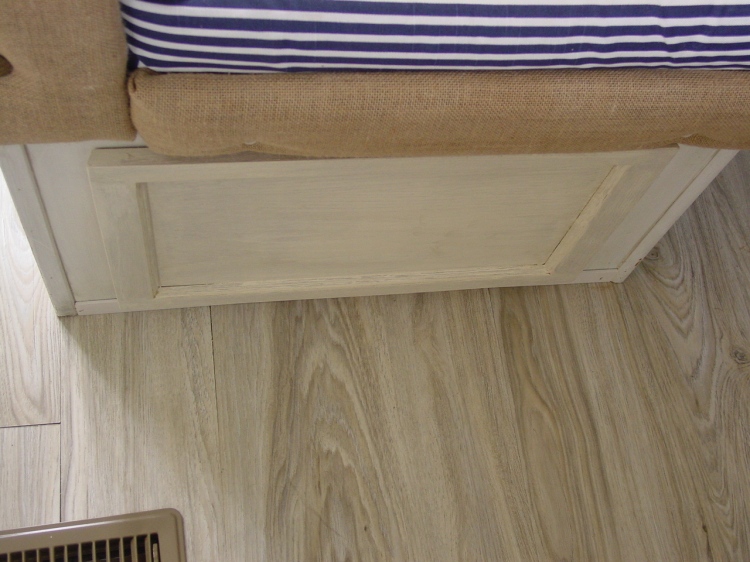 And the cost? That’s the best part. Saint went to a cabinet company to find a door the size we needed. They had one that was close. It was a sample they had made for a client to see, and they had it on the trash pile. It was FREE. Saint did have to cut it down. He had the boards he needed to frame in the inside. All it cost was a few bucks for the hinges and the latch to keep it closed…around $5.oo, and I loved sliding my cast iron skillet, griddle, dutch oven, and pie iron in. I will love even more, getting it out to use without having to remove half the camper!

Another thing we did to get her ready for the season…we bought a roll of Reflectix Insulating Foil. We measured and cut to fit our bedroom windows and the front door. 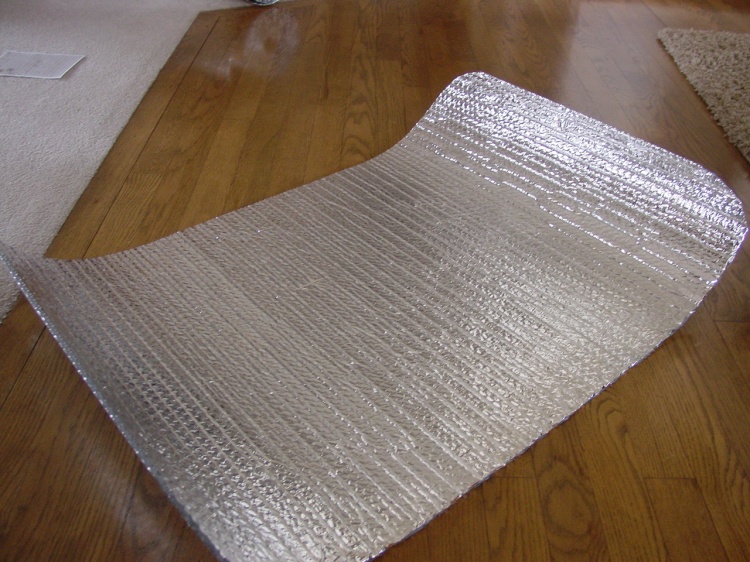 We attached small velcro strips around the windows. They are totally covered by the curtains in the bedroom, and we used inconspicuous white ones for the door. These panels are removed and stored in an upper bedroom cabinet, taking up very little space, and will be awesome this summer for keeping out light at night, and heat in mid summer. We thought we would bind the edges with duct tape, but it was totally unnecessary.  The roll cost about $24.00 which is about what one door panel would have cost to order and ship, and we have about 3/4 of the roll leftover. Not sure what we will do with it, but we will find a use, I’m confident.

Finally, we looked at our outside storage. Well, not really outside, but the area under the trailer that we get to from outside and put all our outdoor equipment in. A few storage containers housing outdoor table cloths, lights, lanterns, oil, charcoal, lighter fluid, etc. really help to contain things for a neater appearance as well as easier access.

See that new folding table I got for my birthday?
I know, most girls want diamonds, I want cast iron and folding tables. I can’t wait to show you what it looks like in use.

So, there you have parts 1 and 2. Part three will happen when the weatherman stops saying the S word. Yes, here it is, almost March, and we have freezing temps and snow in the forecast. This is beginning to cramp our style, but I will show you our new awning soon. And then. Well, we have some great plans and a few new recipes to try. Roar on in, March, so we can get on with it!